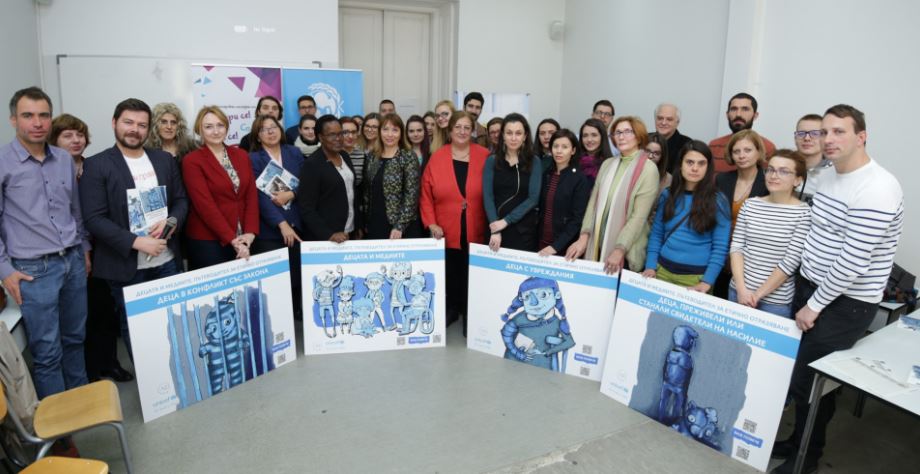 A Guidebook to help journalists and public relations professionals in their work with children was presented at the international conference “Children and the Media. Mission: Ethical Reporting”. The event was organized by the United Nations Children’s Fund (UNICEF) and the Association of European Journalists – Bulgaria.
The two organizations have announced the beginning of long-term cooperation aiming at a more respectful, ethical and inclusive representation of children in the public space.

The full version of the guide can be downloaded here: Children and the Media – A Gudebook on Ethical reporting

The Guidebook is available online in Bulgarian and English and can be used for free. It was created through consultations with experienced media representatives and experts in PR, law, child psychology, etc. It summarizes the principles and issues that are important in different situations when children are in the media. On the pages of the Guidebook there is also information about the legislative framework in Bulgaria, international standards and many practical advice (psychological, legal, technical, business) for defending the best interests of the child, on the one hand, and improving the quality of journalistic production, on the other.
A series of trainings are being developed, based on the Guidebook. They will start as soon as May, and will target journalists, photo reporters and videographers, public relations specialists and students. All of them will set the foundation for a sustainable development of a respectful, inclusive and ethical media environment for all children in Bulgaria – including the most vulnerable: child victims of violence, children with disabilities, children in conflict with the law, children in social services, refugee children or children of minority background.
“Mass media not only supplies actual information – which in the era of “fake news” is more important than ever, but it also promotes values, builds public opinion, persuades, raises awareness and educates. We are here with the same purpose, to create child rights-based, quality journalism – this is essential for the development of a vibrant, democratic and prosperous society. You, the journalists, the PR specialists, the child rights experts are the agents of that social change and you can count on UNICEF as, I believe, UNICEF can count on your commitment”, said Maria Jesus Conde, UNICEF Representative in Bulgaria.
For her part, Irina Nedeva, Chairperson of AEJ-Bulgaria, pointed out that we all need to realize why the level of confidence in the media is falling, and that this trend is directly co-related with the pursuit of “sensationalistic materials” and higher ratings at all costs. In her opinion, in addition to covering children’s problems, the media should give children the opportunity to express their views in a way that does not hurt them or turns them into victims.
Connie Fossi presented the documentary “Prison kids”, which, along with the subsequent public campaign, led to a reform of juvenile justice system in the United States. Ms. Fossi pointed out that her team realized that in addition to only covering the problems, the journalists can work proactively for their solution. As a result of Fusion TV’s public campaign, in 2015 President Barack Obama banned the use of solitary confinement on juveniles in federal jails.
The sensitive topic of sexual violence among children was presented by Tamanna Rahman, producer and director of the documentary “When Kids Abuse Kids”, part of the BBC Panorama series. Like in the example from the US, this journalistic investigation has led to state action. At the end of 2017, the Government of UK introduced the first ever national guidelines (school protocols) on dealing with cases of sexual assaults in schools. According to Rahman, the work on such a project is a teamwork and the role of lawyers, psychologists and child protection experts working with the media is extremely important.
In the Bulgarian panel, the participants were (in alphabetical order): Anna Pehlivanova, editor-in-chief “Dnevnik”; Elena Mateeva, Member of the Management Board of the Bulgarian Public Relations Society; Zina Trifonova, Member of the Management Board of Bulgarian National Television; Maria Milkova, Nova Television; Maria Stoyanova, member of the Council for Electronic Media; Polina Boteva and Alexandra Krasteva, bTV; Tatyana Velichkova, News Producer at Bulgarian National Radio
All of them united around the possibility that the Guidebook on ethical reporting, co-created by UNICEF and AEJ could serve as the basis for the introduction of internal standards and regulations in the respective media. The participants were unanimous about the need for training for media professionals, communication specialists, students in order to make this positive change sustainable. The trainings would help even experienced journalists to gain an operational habit for ethical reporting of children.
UNICEF and AEJ-Bulgaria believe that this event creates a community of professionals that will expand and work for a more respectful and fair attitude towards every child in Bulgaria.
The international conference “Children and the Media. Mission: Ethical Reporting” was realized with the support of “Happy” restaurants.
About UNICEF:
UNICEF promotes the rights and wellbeing of every child, in everything we do. Together with our partners, we work in 190 countries and territories to translate that commitment into practical action, focusing special effort on reaching the most vulnerable and excluded children, to the benefit of all children, everywhere.
About AEJ-Bulgaria:
AEJ-Bulgaria is a member of the international Association of European Journalists (www.aej.org), which is represented in more than 20 European countries. AEJ is an independent organization, uniting journalists from all national sections. Its role is to support quality journalism in the context of European integration, as well to protect freedom of speech. The Association is an official Observer in the Council of Europe’s Media Steering Committee.