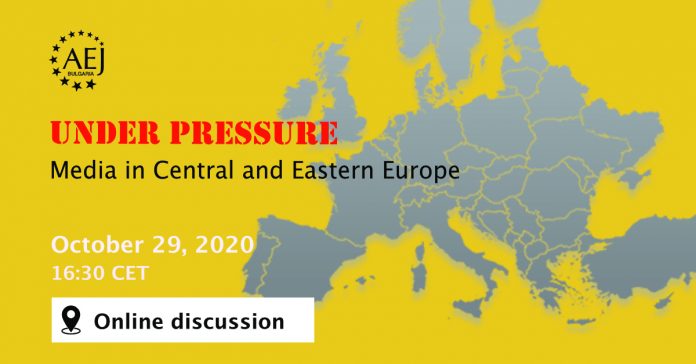 In July, the sacking of Szabolcs Dull — Editor-in-Chief of the largest Hungarian independent news portal, Index — was the latest blow to press freedom in Budapest. The move prompted more than 80 journalists from its staff to resign the very next day, accusing the government of taking over their publication. The plight of the media in other Eastern European countries is not so different. Thirty years after the fall of communism, Eastern Europe is still struggling to build a strong and independent press. The lack of transparency of media ownership and business and political pressure, as well as smear campaigns against independent and investigative journalists who dare to expose corruption, are just some of the problems which have plagued the media landscape in the region for years.

We, the Association of European Journalists in Bulgaria, would like to start a conversation about the assault on media freedom in this post-communist corner of Europe — a problem that is usually ignored until it’s too late — and look for potential solutions.

Please register here. You will receive the Zoom link one day before the event.
Registration deadline: 26 October 2020.

Veronika Munk is a Hungarian journalist, founder and Editor-in-Chief of independent online news daily Telex. She is the former Deputy Editor-in-Chief of Index, also an online news daily. She had worked there for 18 years when she quit in July, 2020, along with dozens of her colleagues because they felt the conditions for their independent journalistic work were no longer in place. She has a PhD in media studies and teaches journalism at ELTE University, the largest Hungarian university.

Marius Dragomir is the Director of the Center for Media, Data and Society. He previously worked for the Open Society Foundations (OSF) where he managed the research and policy portfolio of the Program on Independent Journalism (PIJ), formerly the Network Media Program (NMP), in London. Marius has spent the past decade in the media research field, specializing in media and communication regulation, digital media, governing structures of public service media and broadcasting, spectrum management, and ownership regulation.

Dragana Zarkovic-Obradovic is the Director of the Balkan Investigative Reporting Network in Serbia. With extensive media experience and a strong background in project management, Dragana leads a team of skilled investigative journalists and media development practitioners. BIRN Serbia has been recognized for its professionalism and ability to influence the public agenda in the fields of good governance and media policies.

Rossen Bossev is a journalist at Capital Weekly in Sofia, Bulgaria. He writes on judiciary, law enforcement and human rights issues. His articles are part of the ongoing judicial reform in Bulgaria. He was twice awarded at the International Right to Know Day for his use of the Freedom of Information Act in his investigations. His educational background includes a specialization in investigative reporting in the United States.