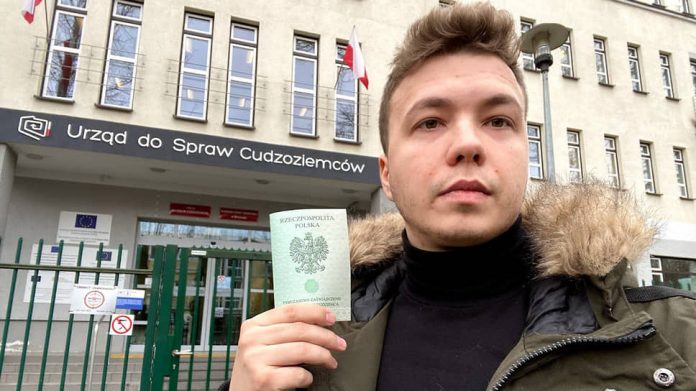 A huge international row broke tonight over the forced U-turn of an internal EU flight from Athens to Vilnius which was then escorted by a Mig-29 fighter jet to land in the Belarusian capital, Minsk. There exiled journalist Roman Protasevich, 26, was immediately seized by police. The other 122 passengers arrived more than seven hours late in Lithuania.

The hijack puts Belarus President Alexander Lukashenko on a fresh collision course with the EU, which in February renewed sanctions against him and his senior officials for the blatant rigging of his re-election last August, violence against protesters, and harassment or imprisonment of journalists.

The issue would be raised at an EU summit in Brussels tomorrow, he said: “The regime is behind the abhorrent action. I demand to free Roman Protasevich urgently!” Polish Prime Minister Mateusz Morawiecki called the hijacking “an unprecedented act of state terrorism. It cannot go unpunished.”  Poland has previously rejected an extradition request by Minsk.

AEJ Secretary-General Edward Steen said: “If Europe as a whole does not finally react now, then when? We are concerned for the very many journalists locked up for months now in Belarus, with more raids, arrests, and phony charges against the TUT.BY online media outlet only a few days ago. Roman faces up to 15 years in prison, maybe worse. Is that a price he or any other journalists must pay for simply doing their jobs?

There had supposedly been a bomb threat, but Lietuvos oro uostai, the operator of Lithuanian airports, said the landing had been “because of a conflict between a passenger and a crewmember.” The diversion of the Ryanair flight was in fact personally ordered by Belarus’ dictator Alexander Lukashenko, Belarusian state media confirmed.

The Dublin-based airline said the plane’s crew were “notified by Belarus (Air Traffic Control) of a potential security threat on board and were instructed to divert to the nearest airport, Minsk”. The flight path, visible on the Flightradar24 website, shows the plane was nearer to Vilnius than Minsk when it turned.

Roman Protasevich was editor-in-chief of the influential sister Telegram channels Nexta and Nexta Live, with an audience of almost two million. These served as a channel for the large-scale protests against Lukashenko’s re-election last year, and exposure of police brutality. Lukashenko countered by saying he would “rather be killed” than hold fresh elections.

Protasevich had been in Athens to cover a visit by Svetlana Tikhanovskaya, a candidate in the 2020 presidential election who declared herself the country’s leader-in-exile after the fraudulent election.

“The regime forced the landing @Ryanair plane in Minsk,” she wrote in a series of tweets. “Roman Protasevich (… ) faces the death penalty in Belarus. We demand immediate release of Roman, @ICAO investigation, and sanctions against Belarus…Lukashenko’s regime endangered the lives of passengers onboard the plane. From now – no one flying over Belarus can be secure. International reaction needed!”

Protasevich told colleagues earlier on Sunday he had been followed while travelling to Athens airport. A man speaking Russian speaker had attempted to photograph his documents, he wrote to colleagues.

“He was next in line at the document check and just turned around and walked away,” he said. “For some reason, he also tried to secretly photograph my documents.” Protasevich has not been heard from since his arrest.