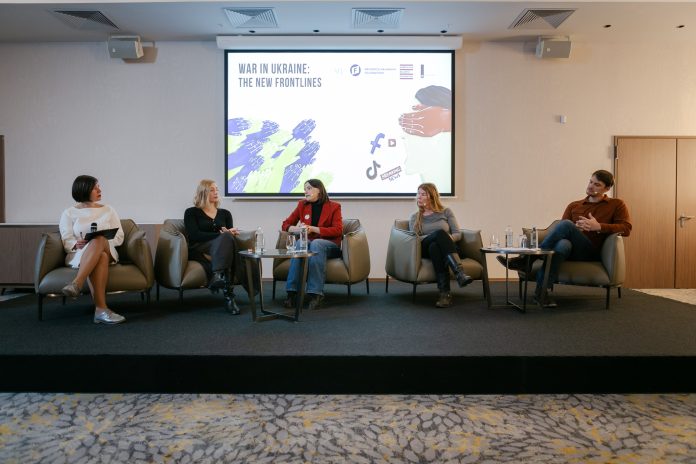 The start of the full-scale invasion of Ukraine at the end of February came as a shock to the whole world. While fleeing Ukrainians and people across the globe tried to navigate through an avalanche of information (and disinformation) about what was happening, reporters – both local and foreign – flocked to the combat zones. These people were the focus of this year’s annual conference of AEJ-Bulgaria, which took place on Thursday in Sofia under the title “War in Ukraine: The New Frontlines.”

The keynote speaker Yevheniia Motorevska, editor-in-chief of the independent Ukrainian online publication Hromadske, reminded the audience that the war in fact started in 2014 and not this winter. “Our media was born in the Revolution of Dignity [in 2013], when our portal live-streamed from the Maidan in Kyiv. When the war in Donbas started in 2014, we covered the combat operation in the East. Reporting the Russian aggression and debunking their propaganda is in our DNA,” she said.

Hromadske had to endure a lot even before the war – the absence of funds made the outlet transform from a classical TV channel into an online media. But nothing could compare to the new reality post-February: two of Motorevska’s colleagues joined the Ukrainian Defense Forces, most of the remaining reporters were forced to turn into military correspondents overnight. “War reporting takes years to learn, but Ukrainians had to do it in weeks,” she says.

To make matters worse, Ukrainian journalists had to start covering brutal stories of massacres, rape, deportations of Ukrainian population and various other war crimes. “One of our colleagues has a one-year-old child and she still goes to the front every two weeks,” exclaims Motorevska. To top it off, now reporters have to endure the effects of Russian attacks of civilian infrastructure. “We are used to working from basements, but the newest challenge is interruptions of the internet and blackouts,” the Ukrainian editor notes. All of these challenges impact the psyche of journalists and are likely to cause an outflow from the profession after the war, she adds.

Aside from bombardments, the work of Ukrainian reporters is marked by various other peculiar challenges. Her media has to follow strict protocols imposed by the state, so reporting on Ukraine’s own losses or details about ongoing operations is impossible. Also, under the radar of international media, which is focused on the war effort, remains a world of domestic politics and scandals that Ukrainians have to report on. “We made an investigation about the deputy head of the cabinet of the President’s office, who drove a car that was designated for humanitarian purposes. Even in conditions of full-scale war, we manage to maintain freedom of speech,” explains Motorevska.

In the first panel discussion of the forum, the editor of Hromadske was joined by the Ukrainian journalist Anna Akage, who is based in France, the independent Dutch reporter Joanie de Rijke, and NPR correspondent Nathan Rott, who discussed how is the Ukraine war different from others. “It is our war, it is a European war, it is in our backyard and Ukraine is fighting against a nuclear superpower – we talk about nuclear threats for the first time since the Cold War,” said de Rijke, adding that the war has global implications due to Ukraine’s status as a grain exporter to poorer nations that are now suffering famine because of the conflict.

Another challenge discussed by the panelists was the conundrum faced by Ukrainian journalists, who have to remain truthful, but can’t just ignore their allegiances. “We are not only journalists but also citizens of a country attacked by Russia. This influences us,” confesses Motorevska. “When things like this happen to your country, it is almost impossible to stay neutral. You remain a reporter, but you become an activist. I don’t think there is a set of rules – you have to find them on the way,” said Anna Akage.

Finally, the panelists discussed the effects of disinformation in the conflict, as well as ways of tackling it. To Nathan Roth and Joanie de Rijke the best response to disinformation would be accurate and truthful reporting. “As we report for US audience, we can afford to wait for 24 hours before posting news. We can hold on and verify, being first is not that important,” says Roth, adding that the best medicine to fake news, in his view, is simple: “Just be a decent human being. Go to people and convince them you are trying to figure out what is going on the same way they do.” Anna Akage has an additional advice for social media users: “Use Tik-Tok to watch cats and food recipes, not news.”