Combating disinformation: The ball is in the journalists’ field 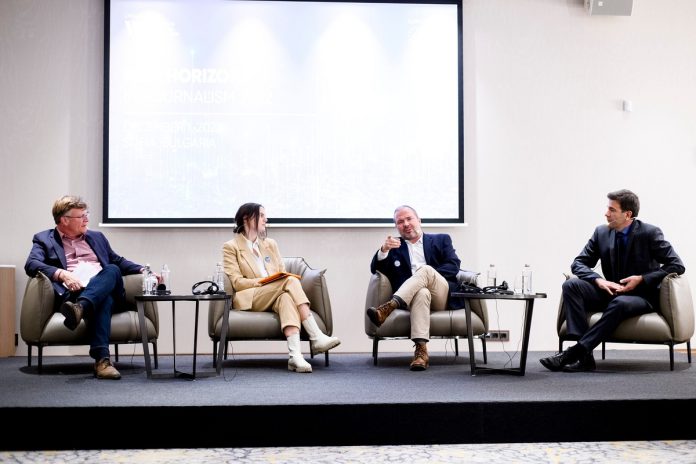 What is the role of journalists in combating propaganda and disinformation? This was the tough question that the keynote speaker and the first panel of the second annual New Horizons in Journalism Conference, hosted by World Press Institute and the Association of European Journalists – Bulgaria on December 1st in Sofia, tried to answer. All of them underlined that individual journalists and their institutions need to protect their agency and live up to the ethical and professional standards of their job.

The opening remarks came from Brian Beutler, Editor-in-Chief of Crooked Media. His focus was on the most significant problems that journalists face today: “[They] are grappling anew with a new generation of politicians embracing disinformation, agitprop and lies with the purpose of making as many people as possible distrust journalists, so that they seek information from partisan sources.” In his view, the essential clash of today is between those who want to be truth-tellers and their sources, which often seek to intimidate them and play them around. To Beutler, what journalists need to prevail in that clash is the combination between resilience (or, as he called it, “grit”) and integrity (“the ability to choose what’s right over what’s easy”).

The US reporter shared several tactics to help journalists not fall prey to disinformation pressures. Firstly, they need to prioritize checking information, instead of retranslating potential political lies to millions of viewers; Secondly, when the debate is flooded with disinformation – they have to choose not to fall for it and focus on the important topics instead. Next, Beutler underlined the importance of experimenting with techniques and distribution methods, including the use of new social media channels. Lastly, he concluded that each journalist “should be a responsible consumer, have high media literacy, criticize bad journalism when they see it. And if we do all of these things most of the time, we will have a better informed society.”

The discussion continued in the panel Combating Disinformation and Propaganda. Moderator Michael Montgomery from the Center for Investigative Reporting outlined the major challenge of combating disinformation today as the “post-fact world” brought upon by both individuals (like former US President Donald Trump) and new technologies (like social media algorithms).

Sophie Vériter, Researcher at ISGA, elaborated on the last point, saying that people online exist in algorithmically created echo chambers, which reinforce their believes. In addition to that, the business model of journalism that is focused on emotional reaction by the audiences works in favor of disinformation. “What I suggest is to take a step back and better understand why we have a disinformation problem in the first place. The problem is structural. We have to better manage the global disinformation disorder,” she said, advocating policies that combat that, including fighting toxic media actors at home, building social resilience through media literacy and supporting quality journalism.

The investigative editor of the Latvia-based independent Russian portal Meduza Alexey Kovalev picked up on the topic of emotions driving media consumption today. “I learned the hard way that disinformation is so successful because it appeals to emotions. I am a failure in fighting disinformation even in my own family. Because the cost of accepting the truth is too high for them.” He went on to highlight the uphill battle fought by him and his opposition colleagues against state-fueled propaganda. “It takes Putin a second to make yet another outrageous claim, but it takes us hours of research to write a historical thesis of why this is manipulation. And he is broadcasting this manipulation to an audience of tens of millions, while we reach less than 1% of Russia’s population.”

Finally, Venelin Petkov, former head of news at Bulgaria’s largest TV channel bTV, talked about the need to “first convince the journalists that facts are sexy.” “Journalists increasingly stray away from facts and prefer opinions, to the level that looking for hard facts – documents and signatures – are not on the table anymore, because it takes time, effort and experience to gain them,” Petkov said. He thinks that politicians have learned that game and know journalists don’t have the money, time and energy to look for the truth, and they use it to their benefit.